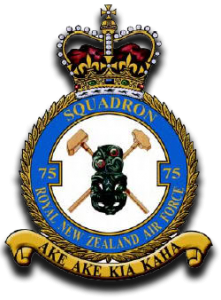 Stirling BK810 took off from Newmarket at 23.47 h. on operation to Mulheim.Four aircraft of 75(NZ) Sqn. would not return that night. 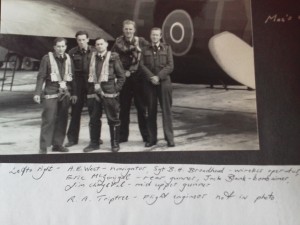 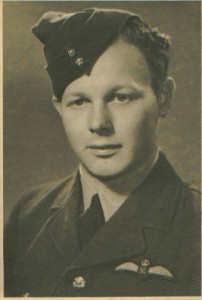 P/O McKenzie and his crew (photo’s by Nesta Janet)

Five hundred and fifty- seven Allied aircraft lumbered into the sky that night, at precise intervals heading for the German city of Mulheim.

It was to be another massive raid in the Battle of the Ruhr involving 242 Lancasters, 155 Halifaxes, 93 Stirlings, 55 Wellingtons and 12 Spitfires. According to those who returned that night, the pilots were looking at Mulheim through a thin layer of stratus cloud on to a spectacular scene of hundreds of search lights massed in cones and flames and smoke rising to hundreds of feet.

In Max’s aircraft above Mulheim, the filtered light from flames, flares and exploding bombs found its way into the cockpit and flickered drops of light on to the face of the 20 year old bomber Jack Blank. He waited for the order to release the bombs. Four nights ago the crew had to return with their bombs from a raid over Le Creusot because they could not identify their target. Jack wanted to be successful tonight.

Max’s voice came through clearly” Over target,” Jack checked the position, then a few moments later replied: “Bombs away.” With their mission accomplished, Max made a right turn to reach a position of 5125 N, 0630,0 in the vicinity of Huls am Niederrhein, heading towards Noordwijk. Suddenly they were hit by flak. Within minutes the crew had the fire under control. Max continued to fly on course, turning briefly to give the “thumbs up” sign when he knew the fire was out.

Nearby Wilhelm Herghet   , a German fighter pilot, slipped underneath the Stirling and fired his 20mm guns into the wings which contained the engines and the fuel tanks. With a blazing wing and a loss of power Max gave the order to bale out. He held the plane on course till he thought everyone had jumped. The last person to leave the plane saw Max struggling to get up out of his seat.

The blazing plane crossed the border into The Netherlands and crashed at ******, just west of Venray at 0210.. Young Jack died after the jump from the plane. No one knows exactly how he died. The rest of the crew, navigator Sgt A E  West, flight engineer R A Triptree, rear gunner Sgt E McGonigal, under gunner Sgt R G Chrystal and wireless operator Sgt B H Broadhead survived the parachute jump.

Thirty- five Allied aircraft did not make it home that night and 198 airmen lost their lives.

Photo’s of the parts

Special thanks to the landowner ,the family of  P/O McKenzie ,UK75(NZ) Association