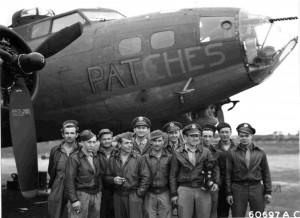 Cunningham crew and ground crew in front of “Patches”

After a co-worker of mine (Michel Truszkowski) started talking with his neigbour,  World War 2 came up.  The neighbour reminded when he was a little kid, a plane carsh in Testelt on 17/08/1943. This happend on 500 meters of his elderly home in the Weefberg, Testelt.

When Michel told me about the crash, we immediatly started looking for all the necessary information.

Also thanks to Jhonny Janse and Chris Van Kerckhoven we came to the conclusion that it had to be B-17 “Patches” from the 8th Air Force 305 B.G. 365 Bomb Sqn.

The B-17 site was already known,  and there was told that we would not find much anymore .

On a sunny 16 Julie 2006 we deceided to make an attempt to find the crash site. After a whole afernoon of intense searching we did not find anything.

Beneath the Weefberg, there were  two older men, enyoing the sun.  I asked them of they by any chance knew anything about the crash.

Both gentelmen starting telling stories like it all happend yesterday. After more then an hour listinging to there interesting stories they pointed out the exact place of the crash site,  or what would be left of it since it exploded before hitting the ground.

With new courage we started  detecting again, and after a very short time we found the first pieces on a depth of 20 cm. At the same spot we recovered some electric wiring and a nice ID tag from an enginepart . 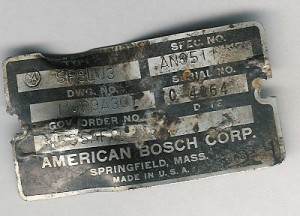 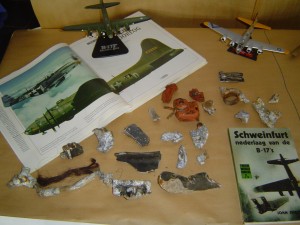 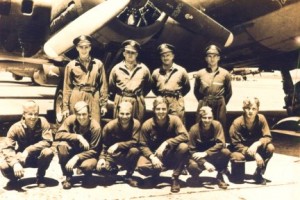 This was my first crashsite and then the whole Planehuntersstory began.

Many thanks to Michel Truzskowski , Jhonny Janse ,Chris Van Kerckhoven,Mike Luce and all other eye-witnesses  in Testelt.