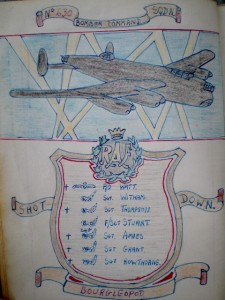 parts ME737  Some nice photo’s of cleaned parts

On the 11th May the Lancaster, based at East Kirkby, took off at 22.28 hours on a mission to bomb marshalling  at Bourg Leopold (Belgium).
According to reports of survivors from that night, there was a lot of confusing and they were not able to pin point their target.
Therefore they decided to turn back to East Kirkby.

Around 23.45 hrs, the ME737 crossed a  German night fighter ( we think it was Heinz Rökker from the 2./NJG2) .
Soon it was clear that it was an uneven battle and almost immediate  two engines were shot in to flames. P/O Watt knew the plane could not be saved. According to eye-witnesses the burning plane flew two times around the city Herenthout, Belgium.
Possibly to give all the crew enough time to save themselves, Sgt Witham en F/S Stuart made grateful use of that.

Sgt Witham recalls “ There was a security leak and the mission was called off  at the last moment, the message did not reach us because there was strict radio silence. We were sitting ducks. We could see that there were no pathfinder markers and we thought we were early .Then all hell let lose . The bomb aimer and me parachuted out of the burning plane ,the blast of the explosion as the plane hit the ground tossed my parachute about”

On 12th May around 00.20, the ME737 with 5 crewmembers crashed on a field next to the Itegemsesteenweg, on ca 1.5Km from Herenthout. From reports from witnesses it was a huge explosion, seen from miles away. For the 5 remaining crewmembers all help was lost.

Thanks to pilot P/O Watt a big catastrophe was avoided, he still managed to crash an nearly uncontrollable Lancaster in to a field next to the town center of Herenthout.
If the ME737, still containing his load of bombs,  would have crashed in the town center, the disaster would have been immense.
These 5 crewmembers gave their lives to save hundreds of citizens.

In April 2011 we did the full recovery of the crash site, we are trying to put up a memorial for this crew. 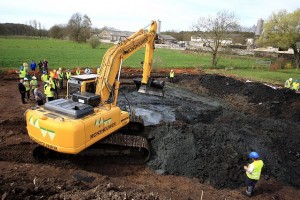 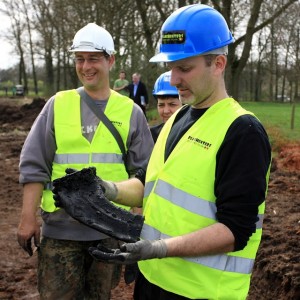 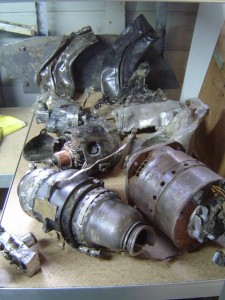 Laurence (fam. of  Sgt. Rowthorn) and Benny finding a Merlin exhaust
Thanks to : Neil Smith and Pete Gulliver from 51 History team  for finding the family members of the crew

Special thanks to help us with the full recovery:

BAHAAT, BOM.BE ,ALL ARCHEO ,my wife Freya for bringing us food and coffee. the people of Herenthout , Dovo , Politie , Vlaamse Overheid

Steve Milnthorpe for the file’s of Sgt. Witham

And last but not least Laurence Featherstone ,family member of Sgt. Rowthorn who was with us on the dig.

For photo’s use this link